Rules are meant to be broken....

OK, I've always been one to break the rules. I of course never whine when I get busted and have to pay the piper for my little digression.

Today's rule breaking was pretty mild. (Mild as in a gorgeous day here in So Cal ~ low 70's and as good excuse as any as to grab the camera and go for a walk). The San Gabriel river was bone dry as whomever the powers that be are have decided to stop the flow of the river for a couple of months. Makes no sense but it gave me a chance to explore an area that has been underwater for a while.

No, the walk in a dried up river wasn't the rule I broke today. It applies to the images I was shooting. Common line of thought are that you place your horizon line, real or imagined either at the bottom third or top third of your image when working with landscapes. This adds the sense of depth and spaciousness (or lack of space such as compression).

Today I opted to position myself in a manner where the horizon line was more or less centered, but used man made graphic elements to create the movement and tension to move your eye from that to elsewhere in the picture.....something off center. In this case in the middle of the dry river there were 2 large pipes that created very strong hard edged lines. The angles they lie in takes your eye away from the center line and keeps your eye moving drawing you in. So there.....a rule broken but it works because other elements within the frame overrode the urge to drift to the center.

I also used to my advantage the shift in light color this time of year. With the sun lower on the horizon you get the warmer tones much earlier in the day. The low light skimming also creates some interesting shadow and contrast changes from the summer months. Shooting north this time of year gets light coming very straight on to a subject which more evenly lit. Also due to refraction, or how the suns light passes through the atmosphere you get much deeper blue skies. The warmer tones and more intense sky add to the energy your eye has to grab hold of when looking at the final image. All that plays into today's shooting and final image as well.

Enjoy "Pipes" shot only a few hours ago here in the San Gabriel dust hole.... 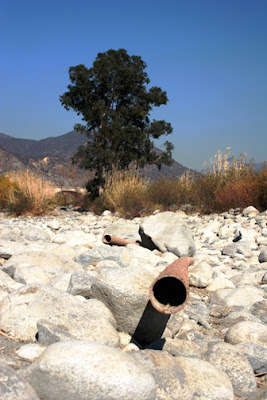